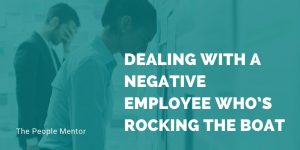 As the business owner, you’ll be used to team issues crossing your desk. From poor performance to attendance issues and disciplinary problems, you’ve probably seen them all. But do you sometimes wish that managers could take the lead a bit more when it comes to dealing with problem teams so that you don’t have to spend your days’ firefighting?

Especially when it’s one person on the team who seems to be at the centre of the problems.

Do you see the same name crop up time and time again? Is there someone who always seems to be pushing the boundaries, stirring up conflict, or speaking negatively about the business, the management, their job role, and pretty much everything, to anyone who’ll listen? Even more worryingly, does this person seem to have a lot of influence within the team, and do other team members follow their lead?

How negativity affects a team

Rather than just being an annoyance, you know that in your experience, negative attitudes, behaviours, and influence can affect the entire team.

Morale will be affected: If everyone is focusing on what’s going wrong, people won’t feel at all positive or motivated when they’re at work.

People will want to leave and absenteeism will increase: Some team members won’t want to work in a negative environment, and those who stay will become disengaged and will begin to model the behaviours of the negative employee.

Productivity will suffer: Low motivation and morale can affect productivity as can interpersonal conflict.

Negativity infects teams like a virus and it must be dealt with properly before it causes real harm to the business. 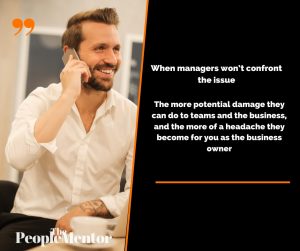 When managers won’t confront the issue

The big problem for you is that when it comes to dealing with difficult or negative people, managers often avoid the issue, or they’re not experienced enough to deal with it properly, and this makes your job as the business owner a lot harder.

The longer that issues are left to linger, the more potential damage they can do to teams and the business, and the more of a headache they become for you.

So where do you start? Well, the bottom line for you is that you just don’t have time to sort out every team issue that crops up, especially when managers should ideally be equipped to do just that. But they often aren’t, so upskilling managers with the ability to deal with difficult people and have those tough conversations should be your starting point.

Managers should be able to speak to a problem employee and:

Inform them how their behaviours affect the team and the business, what is expected of them (referring to company values and behaviours), and what will happen if the undesirable behaviour continues.

Not make it personal. If an employee’s behaviour is disruptive and they’re having a negative influence on others, don’t act like they have an ‘attitude problem.’ Negative behaviour should be treated as a performance issue because it has an impact on team morale, productivity, and business. 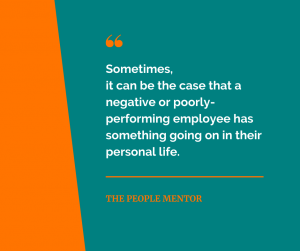 Be willing to help. Sometimes, it can be the case that a negative or poorly-performing employee has something going on in their personal life. Managers should let them know that they want to see them do well and that they’re willing to help wherever they can.

Know what to do if the employee’s behaviour and attitude doesn’t improve. Managers should document any incidences of undesirable behaviour (making sure this is fact, not opinion) and understand the proper disciplinary process to follow if things don’t get better after they’ve had a meeting with the employee.

The importance of making sure everyone understands values and behaviours

When teams are dysfunctional, whether it’s down to the behaviour of one employee or of a few disengaged people, one of the main reasons can be that not everyone understands the values of the business, the behaviours that are expected of them, and how their role fits into the bigger picture.

This is why it’s so important to instil values through inspirational leadership, and outline expected behaviours and role responsibilities in policy or employee handbooks. Once these are made clear, employees have something to get behind, and no one can plead ignorance and say they didn’t know what was expected of them. 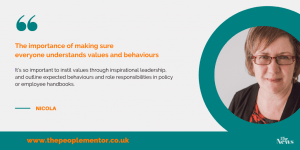 How I can help

As your #Supernanny for winning teams, I can equip managers with the tools, techniques, and skills to deal with people issues as they arise, so they aren’t left to linger and don’t end up on your desk when they’ve reached the breaking point.

I can help teams understand their roles and responsibilities as well as instilling values and behaviours that they can rally behind.

Better equipped managers mean better performing teams and a far healthier business. Not to mention it makes your job far less stressful and gives you your precious time back so you can spend it on those strategic business tasks that really add value.

To find out more about how I can be your #Supernanny and give you and the business a new lease of life, get in touch to arrange a chat.