A small Employer was struggling with team relationships initially.  With only four employees initially, they wanted to understand what was causing the issues and then start to build a team that performed well.

Through observation and a full review, it was quickly picked up that there were some key components missing which included

Working with the team, the behaviours, values, roles and responsibilities were drawn up with full buy-in which resulted in a clear baseline for the future and as a result eradicated the team relationship issues and started to increase the team performance.

To ensure the team were compliant legally training was given through workshops covering the Health & Safety basics.   And then training videos were left for future employees alongside the workbooks ensuring the development of the business continued.

As a result, the team were clear on expectations and their roles and understood how they fitted together, creating better working relationships.

The business owner wanted to develop his business and team so that he could step away and it would run itself and he would have time to do all the things he had dreamed of.  To do this he also needed financial security for him and his family alongside the business continuing to evolve with a secure future.

I started by sharing the techniques of visual management to the team ensuring they were looking ahead and considering all the different elements including people issues.  Through this approach, they also would identify potential risks they would need to mitigate.

Then we had a session mapping the main process as a team which soon highlighted areas of waste which were picked up by the team to change.  It was a useful tool as well to train up a new team member and he said it had really helped his understanding of what they did.

With the team, I showed them how to do an After Action Review after a particularly turbulent few months to identify what had gone well and what could be improved for the future.

We also looked at problem-solving and the different ways of carrying it out, putting in a system to collect problems and then resolve them in a methodical, evidence-based manner.

For the Supervisor who was moving up to a Manager, I spent some time on a 1-2-1 basis identifying areas of improvement as well as his strengths. I then set up bitesize training which was no more than 15 minutes a day and was purely to reinforce learning we had done in our 1-2-1s.  This ranged from delegation skills to making decisions to employee engagement.

As a result, the team members felt more confident and creative.  Problems started to be solved and decisions were made instead of running to the Business Owner all the time. In turn, this meant he could take time away from the business and was assured the business was in safe hands. 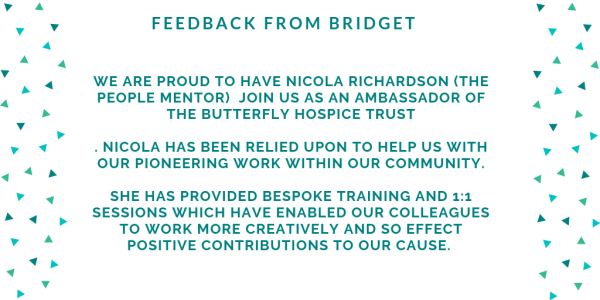