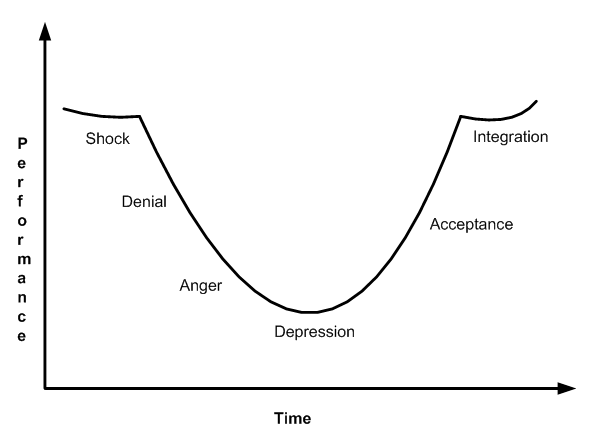 Do we as leaders and Managers really think about how people are affected when we bring in change?

Do we give enough support through change periods?

I think we strive to and certainly try our best, despite all the demands on our time.
A good model to use to aid understanding of the individuals you are working with is “The Change curve” based on the Kubler-Ross Change curve. It covers the emotional stages people experience during any type of change 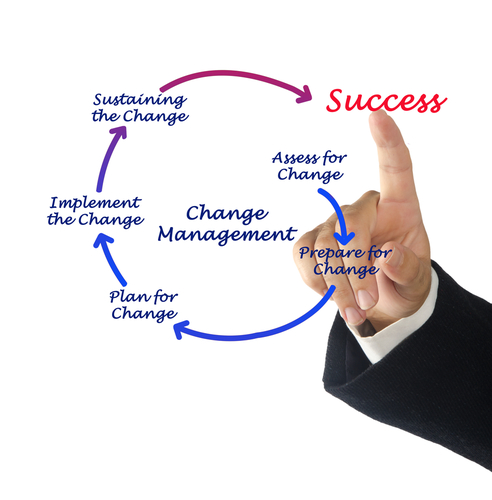 At the initial stage of shock and denial the individual needs to know what it means to them, what the impact will be and general information on the change.
• Communication is vital but not with an overload of facts. Generally leaders and Managers work really hard at this stage and I’ve seen some good examples including Leaders making time to attend team meetings to discuss the change and holding open door meetings.
• One tip I picked up along the way was to set up a flip chart near the teams affected so questions could be added as people thought of them. This keeps it anonymous resulting in more questions. Alternatively, this could be set up as an electronic document.
• The one thing to remember is to be patient with the individual as we all move through the stages at different speeds and keep listening and acknowledging their concerns.

As the person moves through to anger then to apathy, this can create disruption to the team and the individual. I’ve seen people in this stage creating mayhem with the rest of the team, in turn, affecting performance and engagement.
• At this stage, the person needs support and time from their Manager. This is often where it falls down for the individual. It can make the individual feel very alone and not understood, if they don’t get the time. It can make the person feel as if they have been written off if they are moving to another team or department.
• Sometimes the person feels as if the change has been imposed on them and it may just need involving the person by asking for their feedback or involving them in the change process.
• It’s worth re-iterating the benefits for the individual and keep on doing it so the person can absorb these.

The next step is acceptance and individuals tend to move from depression to acceptance by asking questions such as “What does this mean to my job?”
• It’s where the testing of the change begins and it’s important to give the individual or the team time to test and feed into the change. A key point to remember here is that performance will be lower as the team or individual is learning.
• It’s vital to ensure that learning has been developed ready for this stage and remember people all learn at different speeds.
Finally it’s the Integration stage – it’s where individuals know what they are doing and it’s becoming engrained.
• This is where the benefits begin to show and now’s the time to recognise the success and reward individuals for their input and ideas.

Hope the points help with dealing with the emotional element of change.
Have a good rest of the week
Nicola