Are you sitting comfortably? Welcome to my series of podcasts that will help you to navigate those inevitable difficult events at work that are part of being a manager.

Today I want to talk about how to remove and overcome fear in the workplace. 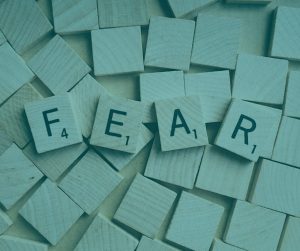 Fear is destructive in a workplace. It can affect individuals, teams, and organisational culture. Fearful employees and teams don’t perform well, because fear impacts upon physical and mental wellbeing, and this has implications for the company’s success and profits.

In the short term, using fear to drive results can be effective. Managers might use fear to motivate teams to perform better, and businesses can use it to intimidate their competition, but in the longer term, a culture of fear is more costly in terms of higher staff turnover and damage to the company’s reputation.

So then, can a culture of fear ever be remedied when it is embedded in a company’s culture?

The answer is yes, fear can be overcome by increasing awareness about how damaging it can be and learning some simple behavioural techniques on how to overcome and remove fear in your organisation.

So what is fear?

Fear is one of eight emotions that neuroscientists say determines the way we act, think, and feel. Fear is destructive, and it’s easily triggered because simply put, it’s designed to keep us safe. When we were cavemen and women, fear was useful in helping us get away from dangerous animals and other threats. These threats most likely would have been short-lived, but it’s when threats are constant that it causes problems. If the brain senses an ongoing threat, it will work to try and remedy it, which can mean we lose focus on other activities by default. And if the brain can’t solve the problem, stress, anxiety, and depression can occur.

The brain and body are constantly on high alert when we are fearful, and while this was helpful when we were running from sabre tooth tigers, it’s not helpful for us now, and it impairs our immune systems and causes illness.

How then, do we deal with fear in the workplace?

Well recognising it is the first step. If we recognise fear, we can do something about it and set about building an organisation that’s fear-free. As a leader, removing fear from the workplace is your responsibility.

There are many signs of fear in an organisation, and the one you might see most often is a reluctance to speak out about things for fear of being reprimanded. Are there things that people can’t talk about in your organisation? 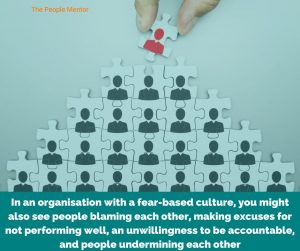 Employees may even speak to you about physical or emotional symptoms they might be getting; they might suffer from headaches, stomach problems and complain that they feel angry, frustrated, or upset, because of their job. The effects of fear don’t just catch up with them at work, they might cause problems with their family and friends, and lead them to develop unhealthy coping mechanisms.

A culture of fear should not be explained away by saying ‘this is just the way things are around here.’ The detrimental effects of fear should be acknowledged, then eradicated.

How can a leader remove fear from an organisation?

When a workplace is fear-free, employees are happier and ultimately motivated to do better. Here are some ways that you can turn things around, no matter how embedded you consider fear to be.

Don’t react negatively to the news, even if it’s bad:

I realise that this may be counterintuitive but reacting to something negatively creates fear. If you get bad news, or something has not worked out as you had hoped, there’s always something you can do to improve the situation. If an employee has to give you bad news and you react badly, they won’t be so keen to come to you with issues in the future, and you might not even get a shot at solving the problem.

Take a deep breath and thank the employee for telling you. After all, if they hadn’t, the situation might have got worse. Now work with them to solve the issue.

The next thing to learn is that sometimes people disagree:

When you can’t agree on a solution to a problem with someone else, don’t shrug it off and go your separate ways, or the next time someone disagrees with you, they might avoid having a discussion with you at all. This can lead to narrow-minded decision making where all possibilities may not have been considered. Instead, let your colleague know that even if you disagree, there will be a professional solution to the problem. People are allowed to have different opinions and sometimes a bit of mutual understanding or compromise is all that’s called for.

It’s also important to make your intentions clear to people:

Let’s say you create a new role within the company. The usual reaction people have to this is thinking about how the change will affect them and feeling fearful. Will people think that you’ve hired someone above their head because you think they aren’t good enough at their job? But if you explain to people exactly why you have hired this person, people are much more likely to understand and support your decision. If there are people who still don’t agree with your actions, it makes them feel more able to constructively tell you why, rather than quietly brooding because they didn’t know what your intentions were.

Finally, encourage people to feel like they can speak up by acknowledging their ideas and opinions before you accept or reject them. Being dismissive of people simply increases fear and embarrassment, and some people may never volunteer an idea again. Acknowledging a person’s contribution makes them feel valued, even if their idea is not acceptable to you. This removes the fears people might have about contributing potentially valuable ideas to the organisation.

These are just some examples of how fear can be removed and overcome in the workplace. Once people, especially the manager, begin consciously acting in ways that remove fear, workplace relationships will improve and the organisation will become far more productive.

I hope that you got some good tips from today’s podcast, and I’ll see you next time. for the next one in the series.

This is The People Mentor, signing off.