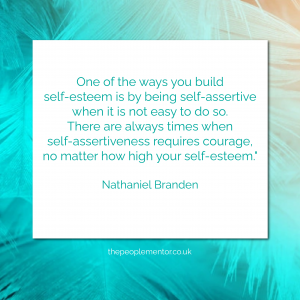 Does being more assertive make you a more effective leader?

In tough times, employees value leaders who will tell it like it is and get the job done, but an important thing to note is that assertiveness is not the same as aggression. You can be assertive without being obnoxious; taking a balanced approach always works so much better.

Assertiveness will help you deal with team issues swiftly and decisively, which is especially important if you have a situation where one disruptive individual is putting team harmony and success at stake. It will also help you rally people behind you, which is crucial in difficult times.

The best leaders, though, were those who were rated highly in both areas.

So what makes leaders assertive and how does this translate in to effective leadership? 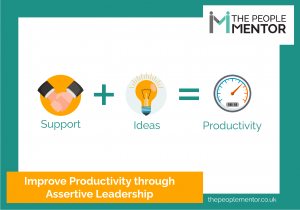 They have an open door policy and communicate well

From the admin assistant to the CEO, leaders take the time to build positive relationships with people, make themselves available, and communicate clearly, openly, and honestly. This makes a leader more trustworthy, respected, and influential, so that when the time comes to make decisions and changes, they are more likely to be able to get people onside.

They know how to give feedback

When it comes to feedback, how employees respond to it is all about the delivery.

Assertive leaders aren’t afraid to give feedback, even when it’s negative, because they know how to take a strengths-based approach. Instead of focusing on what the employee is doing wrong which can affect their motivation and engagement, assertive leaders focus on how perceived weaknesses can be turned into strengths.

This is a far more encouraging approach which is more likely to make people want to do well.

They involve others in making decisions

Assertive and effective leaders don’t just rely on their own judgement, they involve employees in making decisions. This not only empowers employees and improves engagement, different perspectives and suggestions mean better decisions are made.

They are the change they want to see

Assertive leaders set an example to their team, it’s not a case of ‘do as I say, not as I do.’ They model positive behaviours and encourage their team to follow suit.

They know it’s not all about them

No leader is an island, and assertive leaders realise this. Collaboration, support, and sharing the wins is the way to success, not thinking that they can do everything and taking all of the credit themselves.

How would you rate your own assertiveness and you think being assertive makes you a better leader?

I’d love to know your thoughts! 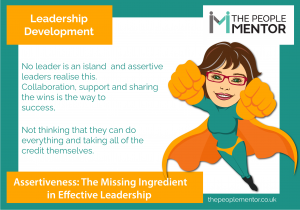 Want help with developing your leadership skills or your team?

You have a good business and team, but what if they could be great?

Do you have some great ideas about how to take the business forwards, but have no idea of where to start?

As the People Mentor for winning teams, I can help you identify what’s needed for the business and teams to flourish in the coming months and beyond.

My bespoke packages of training, workshops, and HR support will help you build and develop the well supported, engaged, and energised teams and managers that will supercharge your business performance and profitability.

I know you’ll feel wary about investing in anything in these uncertain times, but think of my guidance and support as a way to help you reduce costs, improve engagement, and take the business forward even quicker than you could imagine.

Get in touch for a chat about exactly what’s possible.